Working as a Subsea Project Engineer on the NCS rarely exposes you to the challenges of deep water operations. However, on the Polarled 2017 RFO Project this was the base case. 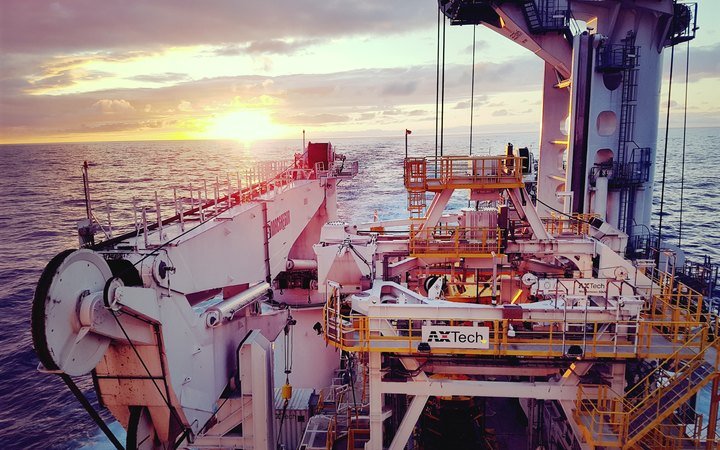 With a working depth of 1300msw and a large number of ROV tools to be operated, there were numerous challenges to overcome in order to get an efficient and versatile ROV system that could operate all tools without the need to recover the ROVs for modification. Additionally, the project specific operations required continuous valve operations for prolonged periods of time.

To limit the impact on the ROV hydraulic system the project decided, with support from Statoil, at an early stage to bring one electrical torque tool on the campaign. However, wanting to know more about the functionality of electrical torque tools a visit was made to Blue Logic’s facilities in Sandnes, Norway. With a torque tool ready to go on the test jig, a session was held with Business Manager Helge Sverre Eide where all the functionalities of the tool was tested. The tool performed outstandingly well with a simple user interface and plug & play set-up. Based on this, the decision was made to go for an all-electric torque tool solution for the offshore campaign as it was viewed as a robust, cost-efficient solution; which also would contribute to improvement and experience with this new technology. This approach was backed-up by Statoil which encourages and promotes “all-electric solutions” for all subsea production and transportation purposes.

Two complete kits were mobilised for the offshore campaign, ready to be exposed to six weeks of continuous work at 1300 metre water depth. Unfortunately, no workshop can replicate the extreme environment of the deep sea so some teething problems were experienced. Issues like pressure sensitive electrical components, water ingress in connectors (user error), software issues, and crushing of the electrical cable resulted in confusion and frequent correspondence with Blue Logic. Nonetheless, no significant downtime was experience due to Blue Logics 24hour customer service. Utilising the remote diagnostic feature of the tool, faults were diagnosed from the onshore facilities and either rectified on the spot or a spare tool mobilised for replacement. Due to some luck and good timing with port calls, defective tools were quickly replaced with minimal impact on operations. 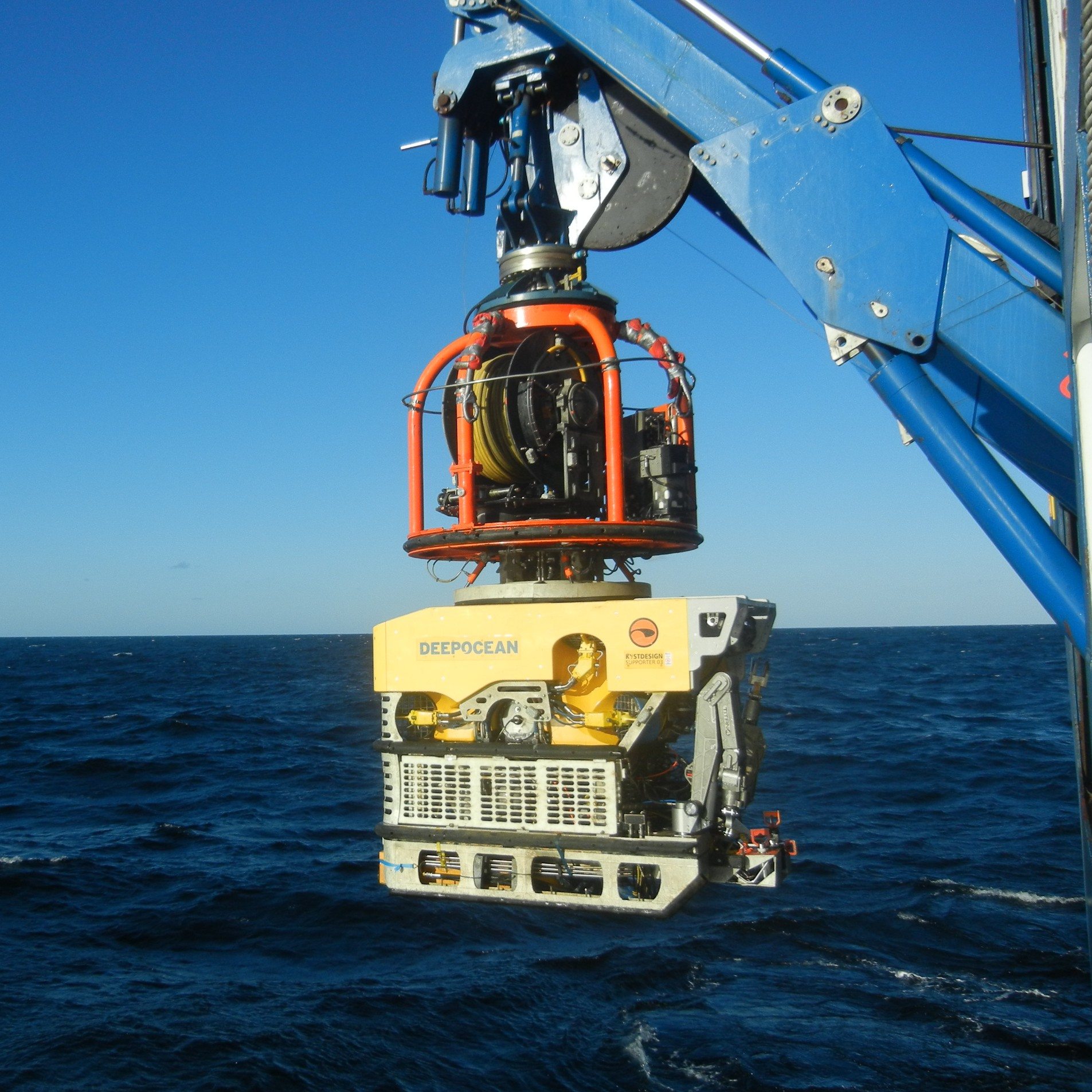 Regardless of the minor issues experienced the overall impression is that the electrical tools performed outstandingly well when in operation and at extreme depths. System set-up was quick and easy due to the plug & play features of the system. Operation was simple, allowing valve operations down to a precision of degrees of a turn, and it can be generally said that when the teething issues were resolved the tools performance was as expected with no need for recovery; even for prolonged periods of time. Some pro’s and con’s that are considered useful
for future users are:

PRO´S:
• Cost- and time efficient compared
to conventional torque tools.
• Easy and quick to set-up / plug & play
• User friendly interface
• Tool is delivered ready for operation and
calibrated, hence no need for additional
calibration or test jig.
• Can be removed and installed on the
ROV when required without need for
re-calibration.
• Compact and robust solution
• Accurate torque provided. No consideration
to hydraulic oil temperature or viscosity
required.
• Instant torque feedback with automatic
logging. Allows user to review and create
graphs of actual torque used during valve
operations.
• Remote diagnostic allows for fault-finding
by onshore personnel if tool is not
functioning correctly
• Environmentally friendly solution, no risk
of leaks to environment.

CON´S:
• New technology; with a consequently higher
risk of faults. Requires offshore testing
and use to identify weaknesses and points
for improvement.
• Electric cable prone to crushing and kinks.
• Offshore maintenance and repair not
possible, must be returned to supplier.


As an overall conclusion, electrical torque tools are an excellent alternative to hydraulic torque tools and the preferred solution. They are robust and easy to use, offering higher precision and versatility with no risk of leak or environmental impact. It is believed that further use will identify any weaknesses and lead to a major improvement in reliability; a risk and responsibility we as the leading subsea contractors must take to contribute to the further development of this technology. Although it is still recommended to bring a spare hydraulic torque tool for contingency, the experience from Polarled 2017 RFO strongly suggests that electric torque tools are the way forward. At least until this technology has matured further and proven its reliability in field. 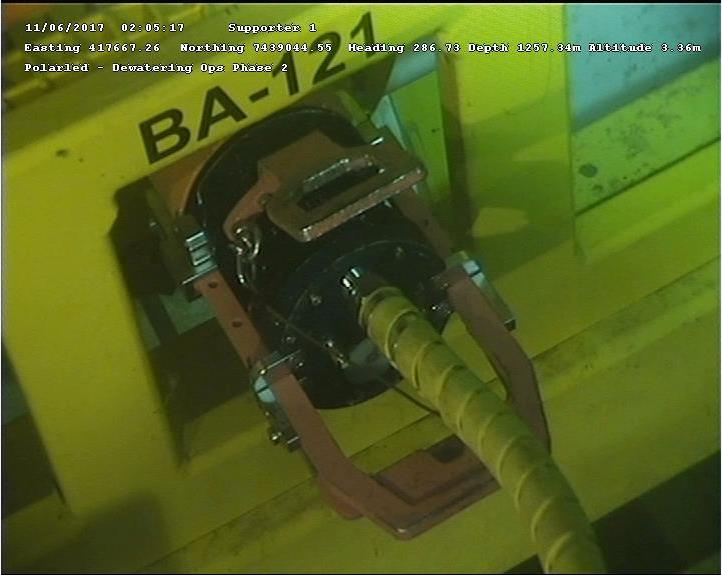 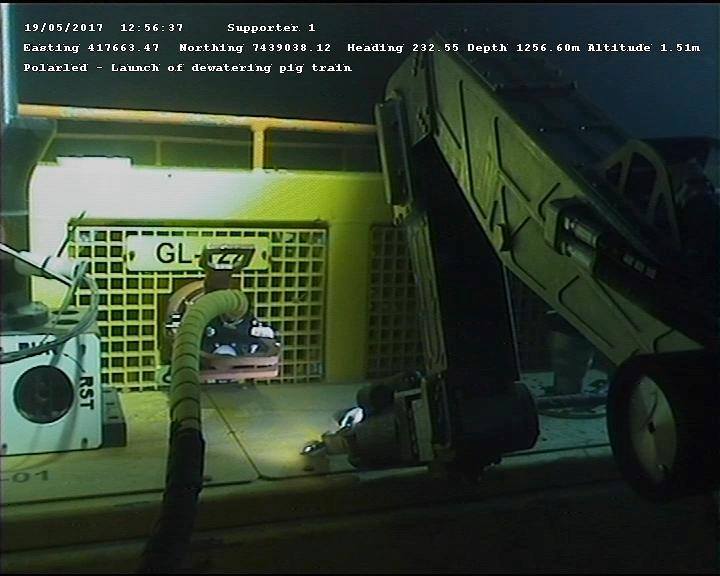 PROJECT INTRODUCTION
Polarled is the first subsea pipeline in the Norwegian Sea to cross the Arctic circle, opening new opportunities for gas export to the markets of Great Britain and Europe. The Polarled RFO 2017 Campaign was the final preparation of the Polarled Pipeline Development; where the 482km long 36’’ pipeline running from Nyhamna and up to the future Aasta Hansteen Field in the Norwegian Sea was dewatered and commissioned. This, to be ready for future gas deliveries from the Aasta Hansteen Spar Platform when installed Q2 2018. The Dewatering and Commissioning operations were performed by Halliburton Pipeline Services in Cooperation
with TechnipFMC on behalf of Statoil ASA. Halliburton Pipeline Services being responsible for dewatering operations from the Nyhamna facilities and TechnipFMC as the nominated Marine Contractor; responsible for all offshore operations required to receive and recover the pig train at the Polarled PLEM/PLR, located at 1300-meter depth in the Norwegian Sea. Offshore operations performed by TechnipFMC and Halliburton personnel included mobilisation of North Sea Giant, spool installation, dewatering operations, pig receival, PLR recovery, valve integrity verification, and HP cap installation. Successful dewatering operations were completed in
June 2017, allowing for Statoil ASA to transfer ownership of the Polarled Pipeline to Gassco which is the dedicated operator of Polarled. 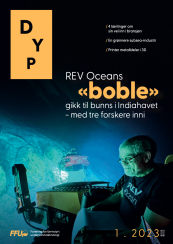