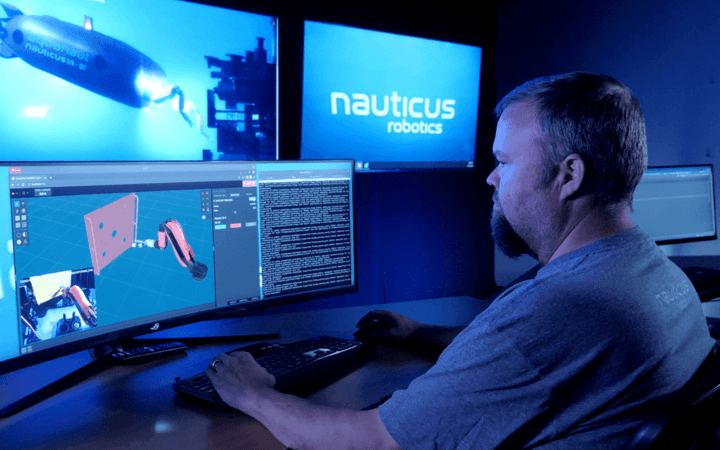 The type of robot control currently being performed by subsea robots is relatively basic and significantly lags the larger field of robotics because of the difficulty of developing, testing, iterating, and deploying subsea robotic systems, especially at any significant depth. Subsea robots with manipulation capability (ROVs - Remotely Operated Vehicles) are directly supported via a tether to a topside vessel or platform using direct teleoperation and utilize positional or rate controlled hydraulic arms via joysticks that drive one axis at a time. To date, this is the operational standard and very little has changed since the first ROV deployed manipulators. As such, manipulation tasks are often hindered by the operator’s direct HD camera view of the target and environmental issues like water currents which often require multiple operators to perform a single task. Although there have been some recent attempts to advance the state of the art using inverse kinematics, motion planning, global referencing, and station keeping, there remains a significant gap in the capability of the deployed hardware and command and control architecture. Even the most advanced subsea ‘autonomous’ robots (AUVs - Autonomous Underwater Vehicles) usually only work through a queue of preprogrammed, yet battery life prioritized, survey-only tasks.

Moreover, subsea manipulation tasks require a person to be in real-time control of the manipulator, otherwise known as direct tele-operation. This can be achieved by either an onsite operator or “over-the-horizon”, but only when certain high bandwidth and low latency networking conditions are met using a hardwired connection to the subsea robot. Bandwidth quality must be within the Megabit range and transport and computational latency must not exceed 400-700ms, depending on the resolution of the tasks required. However, an alternative networking method, using acoustic modems is being deployed by Nauticus but involves several seconds of time delay, not just a few hundred milliseconds. Methods for controlling robots over significant time delay normally fall into one of four methods, or a combination: 1) «move-and-wait», 2) bilateral control stabilization, 3) predictive displays and 4) supervisory or shared control sometimes known as supervised autonomy. Nauticus Robotics has developed and adapted supervised autonomy method — one that utilizes both an autonomous robot and a “person in the loop.” Through this shift in control philosophy, the conventional umbilical can be removed while still enabling manipulation tasks to be executed. This new capability has the potential to disrupt the way subsea services are provided.

An image from a scene of Aquanaut executing an autonomous mission. Insert EFL Connector.

What is Subsea Supervised Autonomous Manipulation?

Complex task execution without a high-bandwidth tether to the robot necessitates a command-and-control architecture that permits local command authority as well as a level of self-sufficiency to execute highlevel, human-directed tasks. Nauticus’s subsea robot, Aquanaut, can take in exteroceptive sensory data with its multimodal perception technologies and plan and execute autonomous actions built from its task library of affordances constructed together using behavior trees. This form of autonomy utilizes robust machine intelligence, with no human participation required. However, to deliver increased mission safety and assurance, Nauticus adds a «supervisory» layer of control — a «person in the loop» — to govern the manipulation process. This method of control utilizes a proprietary acoustic method and networking protocol with a human supervisor authorizing stepwise autonomous actions through “mouse clicks, not joysticks.” Essentially, the human supervisor is flying the autopilot of the robot through its tasking. By pairing an intelligent robot with a supervisory feature, the umbilical can be removed from the subsea platform, thus eliminating the need for a large surface vessel and associated expense.

toolKITT, a software suite developed by Nauticus Robotics, is what enables the company’s approach to supervised autonomy to work at every stage. It provides navigational guidance; vehicle and manipulator control; platform perception; and the ability to plan and execute tasks. The different functions within toolKITT are called “Tools.” These consist of Commander, Helmsman, Wayfinder, Loggerhead and Wavelink.

In the following scenes, which feature the Olympic Arm electric subsea manipulator and toolKITT software suite, supervised autonomy can be utilized. This is achieved by programming the robot to wait for the “person in the loop” to evaluate the still and point cloud images provided, then authorize the next autonomous step. In this level of autonomy, the supervisor can override the robot if they disagree with its next planned action. Because this is possible over a low bandwidth connection, neither fiber nor optical communications are necessary. This method drastically changes the equipment required to complete a mission, eliminating the need for large vessels and additional subsea architecture.

The place of work for Nauticus Robotics is offshore and the Nauticus Fleet of more than 20 surface (Hydronauts) and subsea robots (Aquanauts) will be established regionally around the world within the next two years.

In addition to the service fleet Nauticus Robotics is working with progressive ROV service providers like IKM subsea by providing them our Olympic Arm and toolKITT software products. The electrification movement for work class ROVS and need for dive time productivity can be benefit by incorporating our all electric, intelligent manipulation capabilities.

The goal of Nauticus Robotics is to disrupt the ocean industry with tetherless, autonomous, all-electric robots — from surface to seabed — at a cost reduction of over 50 percent and an almost total reduction of GHG emissions.

A developer of ocean robots, autonomy software and services delivered to the ocean industries. Nauticus’ robotics products and services are delivered to commercial and government-facing customers through a Roboticsas-a-Service (RaaS) business model and direct product sales for both hardware platforms and software licenses. 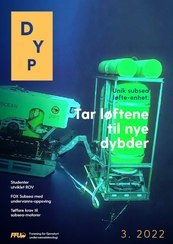